A Guide to Investing in Student Property in Sheffield 2015

If you are looking to make a move into the student property market, you are probably wondering which part of the UK to invest in. Our guide to student property in Sheffield will give you an insight into the Steel City and the opportunities for investment that can be found there. We’ll explore the local area, the universities and the many other attractions that make this part of South Yorkshire a magnet for students from across the globe. For many, Sheffield is still synonymous with its past history of steel production and the invention of stainless steel by Harry Brearley in 1912. The steel industry is so intertwined with this part of the world that Sheffield is still referred to as the Steel City by much of the British public. However, like so many other cities in Britain, Sheffield’s economic and cultural landscape is changing rapidly.

Regeneration projects abound here and the future looks bright for the South Yorkshire borough. Over 60% of Sheffield is covered by green space, yet the city is a bustling and a very metropolitan place to live and work. 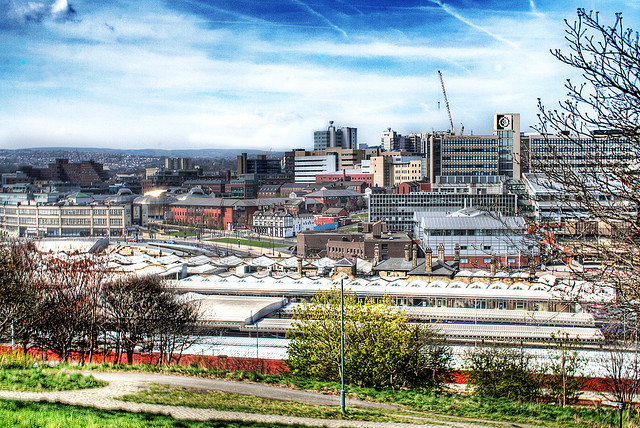 In fact, in a study by Experian, Sheffield made the top 10 of UK cities for business growth and the city’s gross value added (GVA) rose to £9.2bn in 2007, a 60% increase on the 1997 report. Sheffield has continued to enjoy steady growth of around 5% per year, outpacing the wider area of Yorkshire and the Humber.

Transport links to the rest of the country are good, with the city being served well by both road and rail networks. Unfortunately, Sheffield City Airport closed in 2008 but Doncaster Sheffield Airport is a mere 18 miles from the centre of the city and Leeds Bradford International is only an hour’s drive away. Manchester Airport is also easily reached by rail. Changes to the local economy have been dramatic in Sheffield. As we have already touched upon, much of the city’s economy up until the 1970s was supported by industrial means. Steel making and coal mining were the two prevalent industries throughout the 18th, 19th and 20th centuries, but this has been surpassed by less traditional businesses.

Public sector work is now one of the most widespread forms of employment, with local government, the NHS and the city’s two universities employing a huge proportion of the city’s workforce. The retail sector is also strong here and shoppers can enjoy both inner city precincts and out of town shopping malls. These offer a wide range of consumer goods shops, fashion boutiques and eateries. As with all cities that undergo a major transition, things were a little tough at first. Sheffield, however, is now showing extremely strong signs of growth. The Sheffield district of Hallam is reported to be the highest-ranking area outside of the capital in terms of overall wealth. A study conducted by Barclays Bank back in 2003, estimated that the amount of people earning in excess of £60,000 annually was almost 12%. Further to this, a survey carried out by Knight Frank showed that the Steel City was second only to London for growth in office and residential space in the latter part of 2004.

Since then the city has continued to attract new players into the area. Tech companies such as My Job Group, Jennic and 1ClickPrint are all now based in Sheffield and the region has the 9th largest tech cluster in the country. This is good news for graduates, as the greater the number of established companies and burgeoning startups, the better the job prospects for the local area. Along with the changing face of Sheffield’s economic landscape comes the need for much of the city’s outdated and underused areas to be given a new lease of life. Sheffield City Council is working together with the local population and business owners to ensure that the city is fit for purpose in the 21st century and beyond.

Housing regeneration, improving public spaces and protecting the region’s beautiful green environments are all on the council’s agenda. Major projects such as The Moor have been well received and it is hoped that further regeneration will attract more outside investment into the city.

Developing the Steel City of the future A new retail and leisure area is on the brink of being built and it is hoped that work will be completed by 2021. The new precinct, dubbed the Sheffield Retail Quarter, is expected to transform around 900,000 square feet and create 2,500 new jobs for Sheffield. It is estimated that the project will bring an additional £291m per year into the city. Talks are ongoing with prospective development partners and it is hoped that an announcement will be made later in 2015.

Another exciting project is the regeneration of the Riverside Business District. As part of the ‘Grey to Green’ corridor, this work will aim to improve and transform around 1.3 kilometres of redundant road surface into a new public area that will be home to perennial meadows, rain gardens and a sustainable urban drainage system. Professor Nigel Dunnett, the man behind the wonderful meadows in London’s Olympic Park, said in a recent press conference: “The Grey to Green project in Sheffield’s Riverside District is one of the most ambitious and visionary urban landscape projects in the country, further boosting Sheffield’s credentials as a green city.”

The development is also expected to provide new residential apartments and an improved office space for the district too.

Choosing to invest in Sheffield Sheffield in the 21st century is an attractive proposition for investors across the board. Business investment is rising in the city and more and more companies are choosing to make their home there. The cost-effective region offers a high quality location for business premises and the area is awash with creativity. Sectors such as advanced engineering, digital industries, energy and environmental, and healthcare all call Sheffield home – and the list is ever growing.

Property investment is also a market fit for growth. The Daily Telegraph recently named S1 (the city centre) as one of the top 10 most desirable postcodes for buy-to-let properties. The research, which took over 2,600 UK postcodes into consideration, showed that investors could expect a gross yield in excess of 11% – the highest in the country.

Inward investment in the city is high, and Sheffield now has the identity that it has been lacking since the breakdown of the coal mining and steel industries of yesteryear. Local talent levels are strong thanks to the great education system that the city has to offer, and big business is waking up to the fact that Steel City is now home to a new breed of employee. Overall, this modern city has been built on a foundation of hard working folk who care deeply about their part of Britain. Investing in the area is sure to show those who make the leap of faith away from London, Birmingham and Manchester fruitful returns.

Sheffield currently boasts two amazing student property investment opportunities. The luxurious West Bar House is a walk away from Sheffield’s two universities and is situated closely to the main city centre. The socially and communally accommodating Printworks has its own cinema and IT Suite, and all studios/apartments come fully furnished with crockery, bedding and electrical appliances fully accounted for. With both offering the attraction of their own gymnasiums, they each provide outstanding promise for the next savvy investor (9% yield assured in three years) in a city that is in genuine need of more purpose built student property. There are two main universities within the city’s boundaries, both of which have an enviable reputation that draws in students from far and wide. While they may not be as large as some other seats of learning found elsewhere in the world, they are of impressive size by UK standards.

Let’s explore both institutions in a bit more detail: Sheffield Hallam University (SHU) is the larger of the city’s two universities. With just over 33,000 students on its books, Sheffield Hallam is the third largest university in the UK (not counting the Open University). 4,000+ of the overall student population come from overseas; the vast majority of which will be in need of accommodation during their time here.

Spread over two sites in the city, Hallam boasts four faculties. These are:

In addition, the two campuses are home to 30 research centres spanning everything from Food Engineering through to Biomedical Research. Ranked as the 12th best university in the UK and 66th worldwide by QS World University Rankings in 2014, places here are often in very high demand. The Times also placed it 1st for university facilities, student experience and social life in their 2014 Higher Education Student Experience Survey.

Five academic faculties with multiple departments are the bedrock of the university. These are: If you’ve been following this guide closely you’ll already know that Sheffield is a city with plenty of potential. However, it’s not just the future that looks good for the South Yorkshire city – there are plenty of attractive reasons for the bright young things of Britain and beyond to take up residency here today.

Let’s have a look at some of those reasons now:

Student life in Sheffield offers up an eclectic mix, and those with an exploratory disposition will find no end of things to do while they are studying here. Everything from museums and galleries through to dingy (but, oh so trendy) clubs are available here, and half the fun is finding the right places to suit your sensibilities. Sheffield has been renowned as a music city for many years. Bands and musicians such as The Human League, Joe Cocker, Arctic Monkeys, Richard Hawley and Pulp all grew up around here and cut their teeth in the clubs and bars that line the city centre’s streets. Today’s music scene is vibrant and varied too, catering for the many different tastes across the student spectrum.

Sheffield city centre has three main shopping areas that are all within a few minutes’ walk of one another. Mainly made up of the usual high street names, shoppers can pick up whatever they need in Fargate, The Moor or Orchard Square. Smaller, more interesting shops such as Rare and Racy, a bookshop opposite Devonshire Green, break up the homogenised feel and are great places to while away an afternoon. Sheffield is also a great hub for sports, and is home to not one, but two historically renowned English football clubs: “The Blades” of Sheffield United and “The Owls” of Sheffield Wednesday (the fifth oldest club in the country). They both ply their trade in England’s top flights, and the passion for both teams is still as unrelenting as it was when the club’s were formed in the second half of the 19th century.

It is also unlikely that any resident of the Steel City will go hungry. Dozens of eateries and restaurants are available, and all corners of the globe are represented in one form or another. Places like Couch on Ecclesall Road and the Anchorage Bar in the city centre do comfort food at its finest, ensuring that locals and visitors alike are well fed and watered. All in all, despite being already established, Sheffield is still a city on the rise. Things look bright here and investment is being made to increase the city’s standing further still. With two good sized universities that attract students from all over the world, investing in student property in this part of South Yorkshire looks like a sound way to add to, or start, your own property portfolio.